You are here:
Covid 19Sin categoría 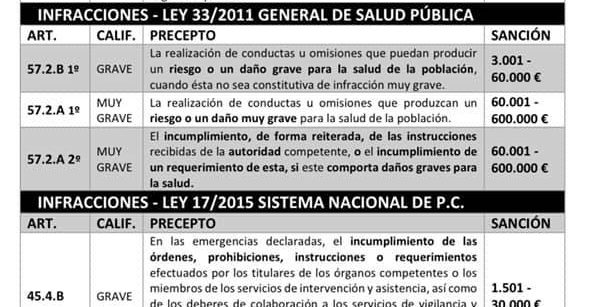 Spain issues fines between 601 and 30,000 euros for those who fail to comply with lockdown decree.

The declaration of the state of alarm will change life in Spain for at least 15 days: closed shops, home confinement; restriction of movement of people and vehicles, closure of schools …

The coalition government has opted for the most drastic measures; and will follow in the footsteps of Italy to mitigate the effects of the COVID-19 pandemic. The Ministry of the Interior has told the security forces that Spain is in an “extraordinary” situation; and instructed them to make it a priority to ensure that everyone complies with the 15-day ‘state of alarm’ which came into force last weekend. Interior Minister Fernando Grande-Marlaska says everybody has a “civic duty” to stay at home and not go outside unless absolutely necessary; and only for the reasons stated in the decree, (please see below), and that anyone who fails to do so will be fined. Citizens are asked to take a national photo ID or passport with them if they do go out.

The decree states that you can only be on public roads in certain scenarios, for example: to buy food, pharmaceuticals and basic necessities; to attend health centres, travel to work, to return home, assist the elderly, minors or other vulnerable people; go to the bank or any other justifiable necessity. However, you will not be able to carry out ordinary activities such as play sports, seeing friends or having a coffee at the bar.

In fact, in order to prevent anyone from falling into the temptation of breaking the rules; and putting at risk the health measures that are intended to be achieved with this state of alarm, the Government; has announced severe sanctions that will be imposed for flouting ‘State of Alarm’ rules. The Police also have the power to arrest those who disobey the order to stay home unless absolutely necessary. The sanctions are stated in the following Acts:

For instance, the Citizen Security Law details minor sanctions of between 100 and 600 euros to those who remove fences; tapes or other fixed or mobile elements placed by the Security Forces aimed to delimit security perimeters; even as a preventive measure when it does not constitute a serious infraction. Similarly, disobedience or resistance to the authority or police agents; or the refusal to identify themselves at the request of the authority or identification will be sanctioned with a fine of 601 to 30,000 euros.

Furthermore, the security forces have been ordered to apply article 36.6 of the law of Public Safety; which means that if somebody cannot justify; why they are outside their home they will be fined between 601 and 30,000 euros for disobedience or resisting authority.

The amount of the fine will depend on the severity of the offence.

For example, a woman who went out onto the street on Sunday 15th; became the first person in Palma to be sanctioned for disobeying the state of alarm. According to reports, she was walking in a park in front of the seafront promenade; when a pair of police officers spotted her and told her several times to go back home. She allegedly refused, and so was made to get in the police vehicle and taken to the police station, where she was identified. The police submitted a proposal to fine the woman to the Government delegation. She could, therefore, be looking at paying a minimum of €600.

On the other hand, the Law 17/2015, of July 9 of the National Civil Protection System Law; regulates emergencies of national interest; (and the state of alarm is as stated in article 28 of the aforementioned law) establishes the following fines in article 46.

Finally, the Penal Code states that offences of disobedience will be punished; with a prison sentence of three months to one year (or a fine of six to eighteen months); for those people who might seriously resist or disobey the authority or police agents.
Anyone who is caught outside more than once or who disobeys orders from the police will be jailed for between three months and one year; under article 556 of the Penal Code. In the most extreme cases, they could go to jail for up to four years. The reports raised by the different police and Civil Guard’s officers will be sent to the Government report.

Nevertheless, if at the worst possible scenario, you might have been imposed a fine, do not despair. Administrative sanctions or penalties, can be appealed through the Administrative courts. Therefore, at the event of receiving a fine, (or being arrested), you can contact our firm several ways:

In light of the circumstances currently affecting the world; and having the ability to work remotely, we have decided to take precautionary measures and suspend in-person service; to the public on a temporary basis until further notice for the security and care of all our clients. We appreciate the current climate and its challenges and are aware that people’s legal needs still need to be looked after; maybe more so now than ever. With the restrictions around people are looking for different ways; they can get help and we have already adapted and are offering help this way on a regular basis. Therefore, we are delighted to inform all our clients and readers; that we can also conduct appointments over the telephone or by video call (Skype or FaceTime at your best convenience)!

Finally, remember that this is not intended to be specific legal advice, just a general overview; so in case you might be interested in receiving more specific information or you might have any question or doubt at all; again please do not hesitate to contact us. We will be glad to help you!

Thank you very much for your attention, and we will keep you duly informed at all timers of any further news announced by the government.